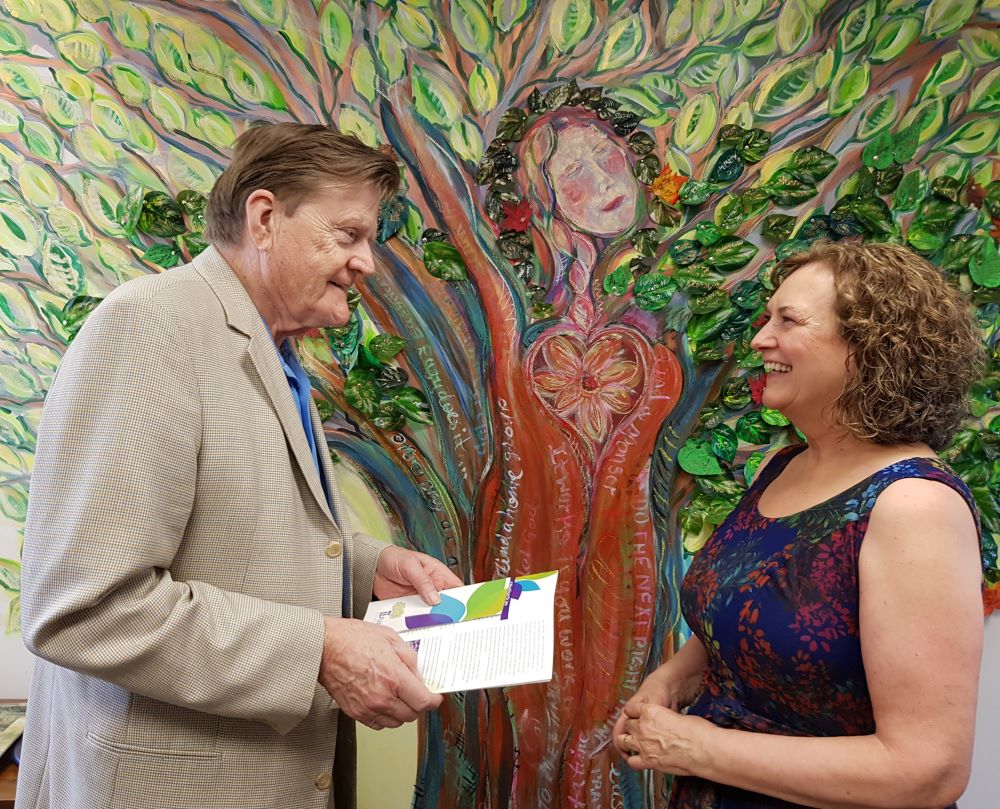 When Heide Mayne first stepped into the Avalon Women’s Centre North Shore at 11:30 on Friday, May 3, 2002 she was a depressed and desperate woman. She attended the midday AA meeting and had "a shift in perception," and became, "that miracle they talk about." Heide found something she had lost:

Heide had known for 20 years that she had a problem with alcohol but she felt she had a certain amount of control over it: "I had a quota a day and only so much alcohol in the house, and I was managing it with difficulty…and I was always thinking that around the corner I would find the right book, or the self-help program or just the right thing to do that would help me drink like a responsible person."

Heide was so depressed that, "I felt at one point like just curling up and going, 'I can't do this anymore, this living thing. I don't know how to do this.'" It was this emotional bottom that prompted Heide to "turn to something extreme like abstinence, like AA."

And by May 2nd, 2002, she realized that alcohol was "bigger than me, and I had done everything I possibly could, and I needed help."

Had heard of Avalon

Years earlier Heide had heard of Avalon in an interview with Helen or Virginia on CBC radio about the opening of a women's centre on the North Shore: "The way they described it, this was  a welcoming place for women who had a problem with alcohol but I just dismissed it as not for me, I don't belong there. I was still not ready to accept the fact that I could actually get help from somebody or something." But the seed was planted.

When Heide was ready she "had a hard time getting up the courage to walk into Avalon." But walk in she did, and her life changed.

Sobriety is a lot of work

Heide went through painful self-examination, worked the program, got a sponsor, went to one or two meetings a day, "and did everything that was suggested except eat candy. No, I didn't buy that, but everything else, I listened, and I followed."

Recovery became Heide's "job" as she had just left her stressful job at the Justice Institute of BC. "My daughter was 10 and so I would get her off to school and do what I had to do in the morning, go off to Avalon for the noon meeting, come home, have a nap, go pick up Caitlin."

Heide also did workshops and saw a counsellor: "Counselling, that was invaluable to me, to be able to take all the emotional turmoil of what I was living with and take it to a counsellor and work through it. I think that was just as important as anything else."

"I started volunteering (at Avalon) pretty much right away." Heide helped out with events, did child-minding and after two years, "I started doing relief work for Monica who was the centre manager at the time."

In 2008, Heide decided to get her addictions counselling certificate from Vancouver Community College. She has a law degree from UBC and could have been a lawyer but, "That just wasn't for me." This counselling training has been vital in her role as manager at the Avalon Women's Centre North Shore. She started this job in 2010.

Event management, grant applications, supervising volunteers, office management, connecting with the community, administrative tasks: "It covers a lot. I wear many hats." Perhaps the largest bonnet she wears is providing emotional support to the women who come to Avalon. She loves this part of the work: "Supporting women through their struggles, and relapses and emotional ups and downs…listening to her, hearing her story, giving her some hope, and ultimately, I think the most important thing is just to give her some love, and that's what we need until we can love ourselves."

Heide knows some women don't make it: "Some women don't come back, and I often wonder how they're doing, or what happened. If they found something else that would support them or help them, or if they're still in their struggle."

It is not unusual for Heide to have to switch emotional gears midstream. Her desk is at the front door of the centre: "I'd be working at the computer on a grant application or some other thing that required some linear thinking. And then yes, somebody would come in, distraught or crying or with a question or a conflict or something, and then turning back to that and then another person, and then turning back to that. That was difficult."

"I used to wonder if you can get a concussion from switching focus so quickly."

Heide says that, "Avalon could not do the work it does without our amazing volunteers; these women of Avalon are the lifeblood of our Centre."

Heide is retiring at the end of August and she has mixed feelings. The job consumed much of her "energy and attention. I'm looking forward to having more time to myself." She will also have more time to spend with her husband who has been ill since January.

In fact, Heide will be busy in "retirement." In July, she will be graduating from Clearmind International’s Practitioners Counsellor Training Program and she is planning to set up her own practice as a Registered Therapeutic Counsellor doing transpersonal counselling, which is a  holistic approach that embraces the body, mind and spirit.

Heide says, "I feel sad to leave Avalon…watching women go from being distraught and hopeless and in despair to having a spring in their step and a new lease on life, watching that transformation was amazing. I never tire of seeing those miracles happen."

Afterall, Heide herself is a walking miracle because of stepping through the front door of the Avalon Women's Centre North Shore 18 years ago.

Rosemary Keevil is an addictions journalist and author with 18 years of sobriety.

Her book, The Art of Losing It: A Memoir of Grief and Addiction, will be published this October.